In 2005, Earwig went on a U.S. tour in support of our DVD ‘Year Of The Drag’. I was persuaded to let an outside party do all of the booking for the 5 week tour which took us to OH, IL, NY, NJ, PA, NC, LA, FL, NM, AZ, CA, OR, WA, UT, KS and back to Ohio. That was a BIG mistake. Most of the shows sucked balls and we were stuck sharing the bill on the majority of the dates with another Ohio band that , how shall we say, left something to be desired. It was a learning experience and we did have a lot of fun. All’s well that ends well, I suppose. Prior to the first date of the tour, Earwig flew to Chicago for an awesome corporate gig and recorded in Engine Studios. Now that was a GREAT idea. 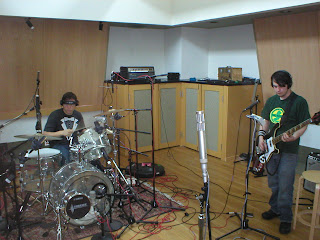 We liked it so much that we returned to record most of ‘Center Of The Earth’ there as well. Along the way, Matt kept a tour diary which he posted regularly to our now defunct message board. We though it might be fun to re-visit some of those entries here.
------------------------------------------
During Earwig's summer 2005 tour, I kept a diary in my little Mead composition notebook. Various details were tweaked or omitted altogether, just for my own amusement. Whenever we were at a place with internet, I would post these diary entries on the Earwig message board with added commentary. It was fun: it gave me something to do and entertained literally dozens of people, who also posted their own words of encouragement. It also ensured our families we were still alive, without us actually having to speak to them (I left my phone in North Carolina and had to have it shipped to New Mexico).
Sadly, shortly after our return home the message board was poached to death by hackers (which is not nearly as bad as being hacked to death by poachers, but painful nonetheless). All of the colorful added commentary is lost to the world forever, but the Mead composition book remains in my possession. Here, for the first time in three years, is the first installment of my tour diary. Take a stagger with me down memory lane, won't you? 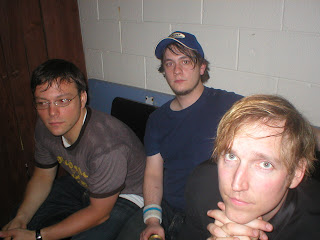 12:20 am central time DOWNTOWN CHICAGO club quarters hotel. Not very breezy for the windy city. So we all got rooms, courtesy evil tobacco LLC. Apparently I've got the best one, here on the 23rd floor - watching, to my right, The Hold Steady on Conan O'Brien (okay, I guess), and to my left, the fucking downtown Chicago skyline. I'll choose the left. Actually, the hold steady sucks. Chicago towers above me and here I am, spitting on the speedy little hotwheels below me. Ridiculous. Magnificent.
My bandmates are presumably asleep. Justin had a long, stinky night yesterday. Lizard's in his room too. Me, I've got a bottle of Jack that I need to find something to do with. Maybe one more drink. How the hell am I going to get half a bottle of JD on the plane tomorrow? Creative thinking. Gonna be a bumpy ride. Street noises in Chitown are surprisingly loud - even 23 stories up. Tomorrow we make the hits at the (rented out) Metro. But I'll be up all night. ->How the hell did I get myself into this? ->And I wonder if I can get myself into this again?
Posted by captain lizardo at 6:10 AM No comments: 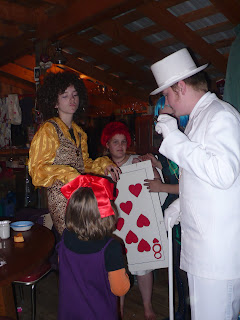 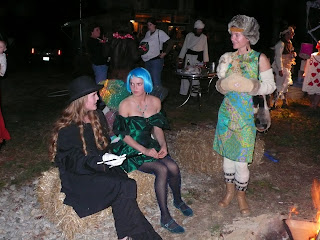 Here at LFM secret HQ, everything is grand. As I mentioned in the inaugural post for this blog, there’s a golf course in my front yard named ‘Assisi Threepio’. My best friend and numero uno golf-buddy is a shipwright and knows lots of crazy pirates. We play golf just about every weekend and we're full of glorious ideas so we decided to start our own golf tournament and invite all of our wonderful, crazy friends! On Halloween weekend we hosted the first ever Assisi Threepio Silver Baby Cup Challenge. Sixteen golfers, thirty spectators, four rounds of elimination golf, a one hundred dollar cash prize and a very nice engraved silver trophy cup. Guests arrived from all over the United States to camp for the weekend. Folks from Maine, Ohio, Tennessee, West Virginia, New Mexico and Arkansas regaled to the sounds of Earwig (with Nick S. on drums!) at the annual Freeman’s Secret Ball costume party bash on Friday night. The band played on a specially built outdoor stage constructed just for the occasion. 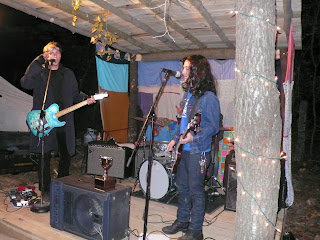 Saturday saw it’s share of surprises and upsets with the first four rounds of golfers. 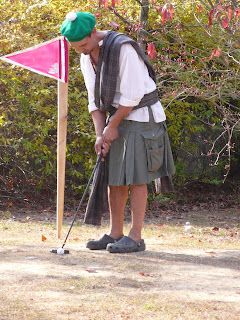 And an outstanding evening of entertainment from our pals the Itinerant Locals and Trapper Haskins. 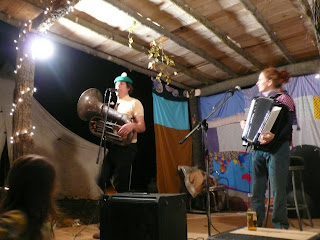 Sunday was the final round of golf. I actually came in second
(thank-you very much). 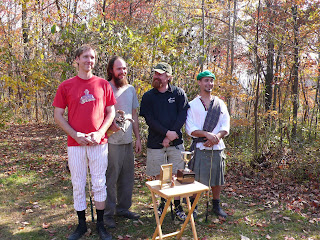 The trophy, the large $100 check and the honor to host next year’s tournament went home with Andres Bermudez, otherwise know as the "Madman in the kilt". 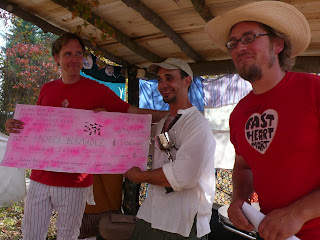 Posted by captain lizardo at 10:23 AM No comments: