This guitar’s been dreaming 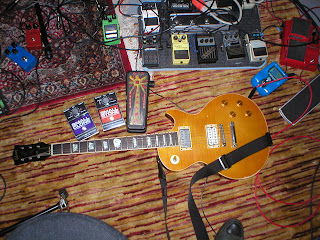 After recording Mayfeeder, Earwig‘s first album, I listened back to the songs and had a revelation. Every song was about Sleeping, Dreaming or Dying. Since then, I’ve noticed that each Earwig album seems to organically develop a theme that ties the songs together. It may not always be so obvious but, at least for me, it’s there. I mentioned in an earlier post about how all of the songs on the new record have come to me in some shape or form through dreams. The album title came in a dream too. In the dream, I’m sitting in the center of a huge movie theater all alone. It’s an older, well kept theater with a balcony, very much like Cinema East. The screen is monstrously tall and wide with velvet curtains hanging on either side. The silence is broken by the familiar sounds of the film starting it’s roll through the projector as the house lights go dark. The film is running, but the screen is blank, no images. As I sit patiently, a white light glows through the movie screen, filling it with large block letters. They read “Name your album GIBSON UNDER MOUNTAIN.” Simple and direct, with no sound or other images, the letters hang on the screen. After a time they dissolve and I can hear the sounds of the film rattling into the take up real as the screen goes blank. Not long after this dream, I started writing most of the songs that would become the new Earwig album. I can’t say exactly what the title refers to, but it seems to make sense as a title for this album if only because these songs are collected from dreams as well.

An interesting note. I had this same dream once before, almost exactly, as a teenager. The difference is that that time the message on the screen told me “Name your dog PINK LEADER”. Strange, huh? I thought it was pretty odd, but I wrote down the message and carried it around with me for some time. I never did name my dog Pink Leader. But I’ve always remembered that dream and wondered what would have happened if I had taken the advice to heart and followed through. This time around, I’m going to find out.

http://www.lizardfamily.com/mp3s/Sleepyhead_MCHacoustic
To download the MP3 go to File -> Save as and store the file on yr desktop

This week’s song is Sleepyhead. I actually wrote this song as a teenager and the opening melody and basic story were in a dream I had around the same time as the first movie screen message dream. In this acoustic version I play the opening guitar lick in a sort of choppy, old fashioned way. For the full band version, that lick is much more aggressive and fluid. And louder, of course. And the middle bridge is filled with glorious 12 string guitars that would make Johnny Marr turn green with envy.
Posted by captain lizardo at 10:20 AM No comments: 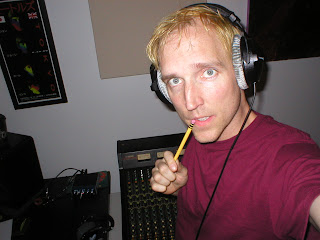 So many decisions to make, so little time. That’s what my life seems like lately. In a good way though, so I don’t mind. It’s just a matter of getting things done. I didn’t post a song last week because my web-guru, Mr. Allan Foster, was out of town on vacation. Good for him. Now that he’s back, here’s this week’s (or last week’s!) song…Lovesong Cockroach.

To download the MP3 go to File -> Save as

and store the file on yr desktop

Generally speaking, I write two types of songs. Forlorn love-songs and ‘Fuck You’ songs. Despite a forlorn lyric or two and even though it has Lovesong in the title, I’d say Lovesong Cockroach has it’s feet planted firmly in the ‘Fuck You Song’ category. It says “I’ll do what I want and I don’t need or want yr approval”. The full band recording is turning out well. I put in a couple of tasty whammy-solo bits and next week we’re going to record Matt’s earth-shattering bass-wah solo. I’m looking forward to that. You should too.

Last week, Landy and I tackled guitars for Rumplestiltskin. As some of you may know, Rumplestiltskin is a very important song for this record, it’s awesomeness is the stuff of legend. It also features a cool/loud guitar riff that demands to be recorded with a high degree of ROCK. All we need are amps that go to 11, right? Well, it turns out that’s harder than it may seem. We selected the most righteous guitar, plugged in through a heinous array of pedal effects, set the amps to stun and let loose the dogs of war. After several hours of sifting through the ensuing rubble, we found nothing satisfying and were left cold and defeated. Beware…high volume guitar noise can kill. Unfortunately, this flawed process continued and the mythical beast that is Rumplestiltskin eluded us for two whole days before Mike realized what the problem was. As usual, I had found a hub-cap on the way into the studio that week. I brought it inside but forgot to tell Landy, so he never hung it up on the vocal booth wall, which is our routine. It was laying unattended to and un-loved by the door begging to be rectified. As soon as Landy hung the metallic talisman up, the tides of battle shifted and the shackles fell loose from our creativity. Victory was ours. When the dust cleared we found a plethora of cool guitar riffs that sounded like anything from Nine Inch Nails to MUSE. Don’t worry, in this context that’s a good thing. Industrial to be sure. We also had some old friends stop by the studio this past week. John B./Fletch stopped by and my pal Jamie Clark dropped in for a visit one evening. It was good to see them. 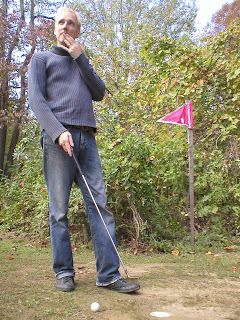 I wish you were here. It’s a beautiful day. If we were drinking some tea together and relaxing on my front porch, then maybe I’d be able to directly explain my recent fixation with the dimensionality of space and the fourth form of consciousness – the intuitional. I’m sold on the power of random direction. I don’t necessarily need to know why I should be doing something or making a decision to move forward in a new way, only that I feel some discernable compulsion to go in that direction. There are certain activities that lend themselves well to letting go and tapping into the intuitional muse. For me, one of those activities is golf. I live deep in the heart of nowhere, on the edge of Ohio’s largest state forest. Last year I had the impulse to put in 3 holes of yard golf in my large front yard. It was a good decision. And now a nice Sunday afternoon usually means one thing, 9 holes of yard golf. I’m a terribly untrained golfer, I have no real base of knowledge about how to golf in the traditional sense. When my friend and I play a round on Sundays, it’s a great opportunity for me to let my intuition take over and drive my golf-game decisions. It helps clear my mind and bring into focus other things I’m subconsciously working out. Like recording with Landy. Right now, we’re taking off two weeks from our recording schedule and the golf sessions help me to work out problems and questions about songs, parts and other recording details that have come up for us. When we start again next Monday, I’ll be fresh and full of new ideas. Another way that I’ve been able to access intuition is through dreams. I often wake up and jot down some quick notes on the best bits. I try to let them guide me without spending too much time trying to understand why. While I’m on the subject, I should mention that songs often come to me in dreams. Little bits and pieces of a melody, lyrics, titles, random situations. I don’t always write this way, but a lot of my favorite Earwig songs have come directly out of dreams (Dinosaur Song, Used Kids). The title for the new album came to me in a dream and it’s a collection of songs that also came to me in dreams.

For a time, my family lived on an awesome, secluded 600 acre farm in Pendleton Co., West Virginia. We loved it there and it was hard for us when the time came to leave it all behind. After we moved away, a woman came to me in my dreams. She was dressed a bit like the Swiss Miss lady and sewn to her breast, above where her real heart would be, was a prominent red patch (I was re-reading The Scarlet Letter at the time…). The patch was of a simple red heart, broken down the middle. She came up very close to me and gesturing to her broken heart, she said “I’ve been torn in two.” This week’s acoustic song is ‘Her Heart’.

Posted by captain lizardo at 5:45 AM 3 comments: