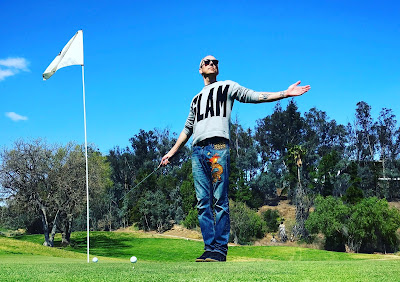 Last summer my buddy Rich from NYC told me that he had been watching a crazy show on TV and he thought I’d be great on it.

That show was Holey Moley. The show is built around an extreme minor-golf competition. It’s wild. I’d never seen the show (I don’t have TV), but I went online and signed up anyway based on Rich’s recommendation alone. I got a call back a few days later and after a series of interviews and further submission videos I was in serious talks with the producers about being featured on the second season of the show.

I pitched myself to the show as a Rock Star and I think that set me apart from the other entrants. I had no idea at the time but have since learned that with online submissions and open casting-calls in LA, the producers had thousands of people to choose from. It’s amazing that I made it through so many other people that wanted to be on the show. You might not guess it but I golf. I’ve never played on a professional course but I have a true Scottish-style, home-made golf course at my house and I also co-founded a radical, underground renegade golf tournament called The Silver Baby Cup. I’ve read the Zen Putting books and yes, I can putt. But it still blows my mind that I made it on the show. I flew to LA for 10 days in February and it was a blast. I met so many cool people and had a wonderful time being on Holey Moley.

I'm still pretty blown away by the whole experience. It was intense and I had a great time competing. If you watch the show… it’s a LOT harder than it looks! When I made the online submission for the show, they ask you to upload a video telling more about yourself and showing you making a variety of different putts. I shot the video with my phone while I putted on my home golf course. I also have a putt-putt hole in an old boat in my yard.