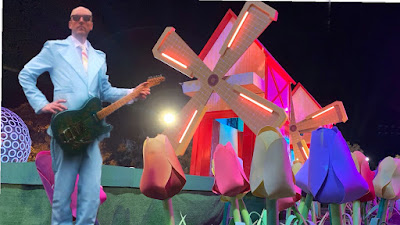 I'm still reeling from the experience of being on Holey Moley, an extreme mini-golf competition. You can watch me as a featured player on Episode 2, which airs on ABC on Thursday 5/28. Flying to L.A., meeting all of the other cool contestants and hanging out on-set was a wild ride. I would do it again in a heart-beat. Filming was intense and playing on the show is much harder than it looks. I got knocked around pretty good and had a couple of slamming wipe-outs. I came home with some cool bruises. You'll have to watch the show to see how it all plays out.


This was the 2nd video I submitted for Holey Moley

I'm one of the few players that just came to the show out of the blue. I had never heard of Wipeout or Holey Moley when I first applied. Looking back now, it's incredible that I made the cut out of the thousands of other applicants. The show is very popular and loads of people want to be on it. There are big casting calls in LA and I found out that the producers actually source a lot of the contestants from short lists of pseudo-celebrity instagram influencers, reality TV personalities, pro and semi-pro golfers. When I got the initial response to my first submission video, I knew that they liked me. After all, they probably didn't get many submissions from Rock Star golfers with 17 cats! Once I made it through the initial round of phone-interviews and a couple of call-backs, the Holey Moley producers asked if I could send another video with me making specific putts. They said that they wanted to see me play on a real golf course. At this point, I knew I had a shot at being on the show so I wanted to push the Rock Star angle. That gave me the idea to have my putter in a guitar case instead of my guitar. James and I snuck onto a couple of local golf courses (with our friend Rio) and made this video. The first few shots are at the Athens Country Club. The footage in the rain was filmed at the O.U. course. I filmed the mini-golf shots myself at the abandoned putt-putt by the Ridges in Athens. I remember filming the footage at the golf courses and we were blocking golfers who were trying to play through so they were waving their clubs and yelling at us from the fairway. We were un-perturbed!

It was at this point that I started to bring some Zen into my putting practice. If I was going to go through with this I wanted to be able to perform at the top of my game. I decided to title this video Mind Control for Golf Balls because I was seriously digging into my mental game to lock in my ability to sink putts under pressure. I cut the footage from me putting on Athens area golf courses together and used an Earwig song (Sleepyhead from the album Gibson Under Mountain) to make sure it rocked. Check it out through the link above.

One of my favorite things is the last shot in the video. I love the sound of the golf ball hitting a tree in the end! I'm wearing a Purple Rain t-shirt too.

Posted by captain lizardo at 9:02 AM